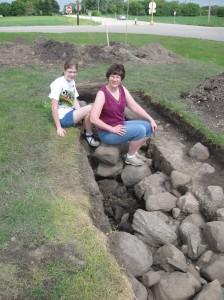 Emily Demuth and her daughter, Louisa, at the Mather Inn well excavation.

The archaeologist, Norm Meinholz, was digging at the site of Mather Inn again this month.  This time, I managed to get back to Wisconsin while the dig was still open. Meinholz had uncovered part of the old foundation and established the exact location of the Inn, when  it stood facing the Plank Road.   The Mather Inn itself still stands  a stone’s throw away–it was moved many years ago, and now faces what would have been the Section Line Road between the Mather and McEachron properties.

Just a few paces west of the foundation, the archaeologist had found the well.  Stones formed a perfect semi-circle (only half had been uncovered).  It was easy to imagine Katie pulling a bucket  of water from the well, setting the bucket on the stone rim, and peering at her reflection–even though that scene was edited out of our book during an early revision.

Many scenes never made it into the final version of Plank Road Summer, including one which our mother particularly liked.  This lost scene was the first introduction to the Mather Inn from Katie’s point of view:

“Katie walked past the grand front door that led to the parlor and the ballroom upstairs–that was for guests.  She hurried round past the porch on the west side, which led to the dining room–that was for teamsters.  At the back of the house she rapped at the kitchen door–that was for neighbor children.  Mrs. Mather was very particular about the proper use of doors.”

As I walked around the original site of the Inn and stood where the front door had once been, I slipped back in time–back to when traffic sounds were the creak of a harness or clopping of hooves, and when water came not from the faucet but from a bucket drawn daily from the well.  Had Hilda and I seen this circle of stones a couple of years ago, I’m sure we’d have kept the well scene in our book.

Click here to read a newspaper article about the first dig.

Hattie's War
In 1864 Milwaukee, eleven-year-old Hattie Bigelow, who is more interested in baseball than in sewing circles and other women's efforts to support the Union cause, loses her back yard to a garden for the new Soldiers' Home and rebels against her family's expectations in a society transformed by the Civil War.

Plank Road Summer
Two 13-year-olds, Katie McEachron and her best friend Florence Mather, experience a new and exciting world one summer, as the plank road brings strangers to their dinner tables and the plight of runaway slaves to their consciences.

Plank Road Winter
This middle-grade historical novel is set in rural Wisconsin in 1871, in the aftermath of the Great Chicago Fire and the Civil War, as young Sophie and Hans deal with issues of family, friendship, and the importance of making good choices in difficult times.